(2D Photos exclusively on this page. See below for 3D Galleries. Click to Enlarge Photos) 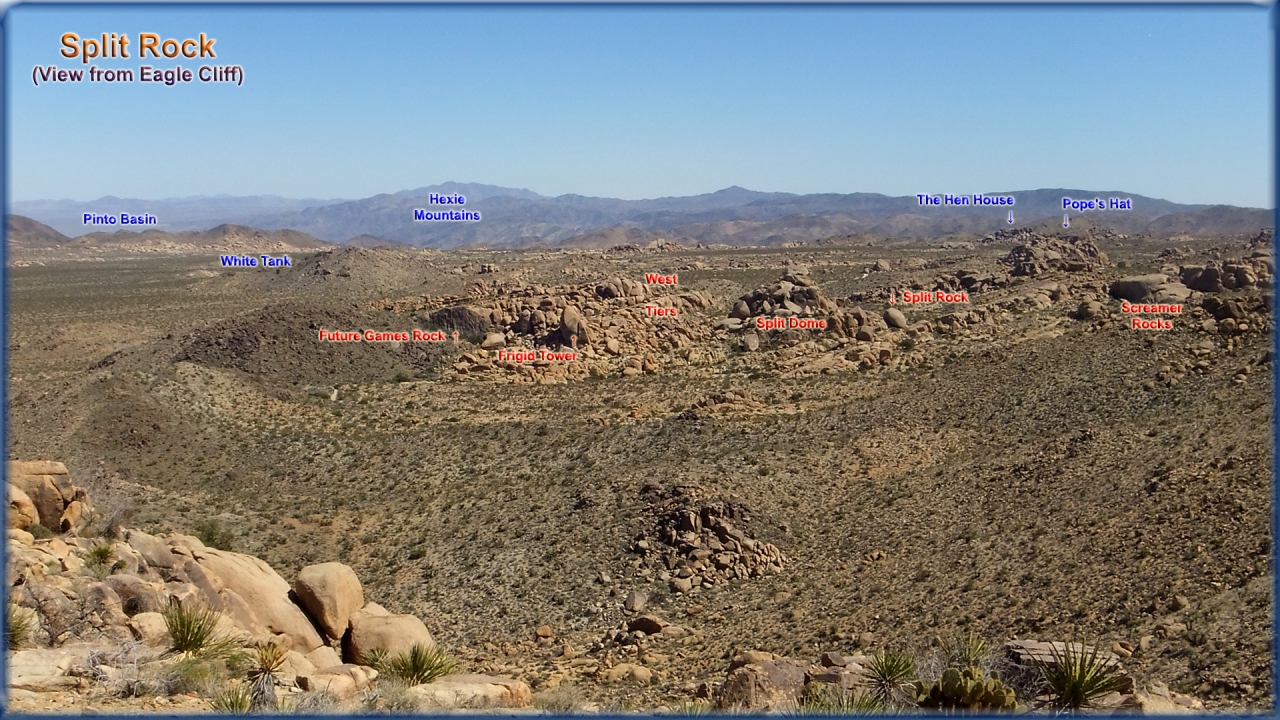 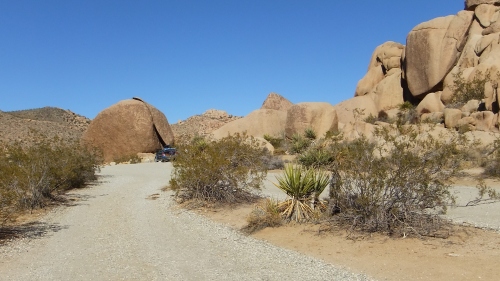 On this Preview Page 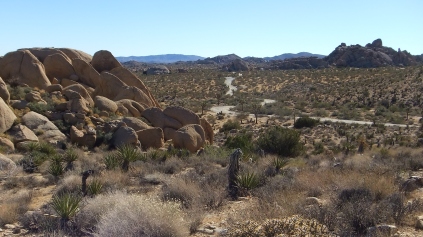 TO REACH SPLIT ROCK PICNIC AREA of Joshua Tree National Park, take the marked road that leads north off the Park Boulevard at a point 1.2 miles past Jumbo Rocks Campground. This road ends at the Split Rock Parking Lot. Picnic tables and a restroom are available, and on just about any day you’ll find rock climbers on the surrounding large granite formations.

Because the Split Rock area is quite extensive, I am making seven 3D Galleries which you can link to above or under each numbered heading. 3D images require red-cyan glasses to view properly. All photographs in this Main Index will be 2D.

Click images to enlarge. 2016p (4K) resolution. Or Windows users, right-click and choose SAVE LINK AS. 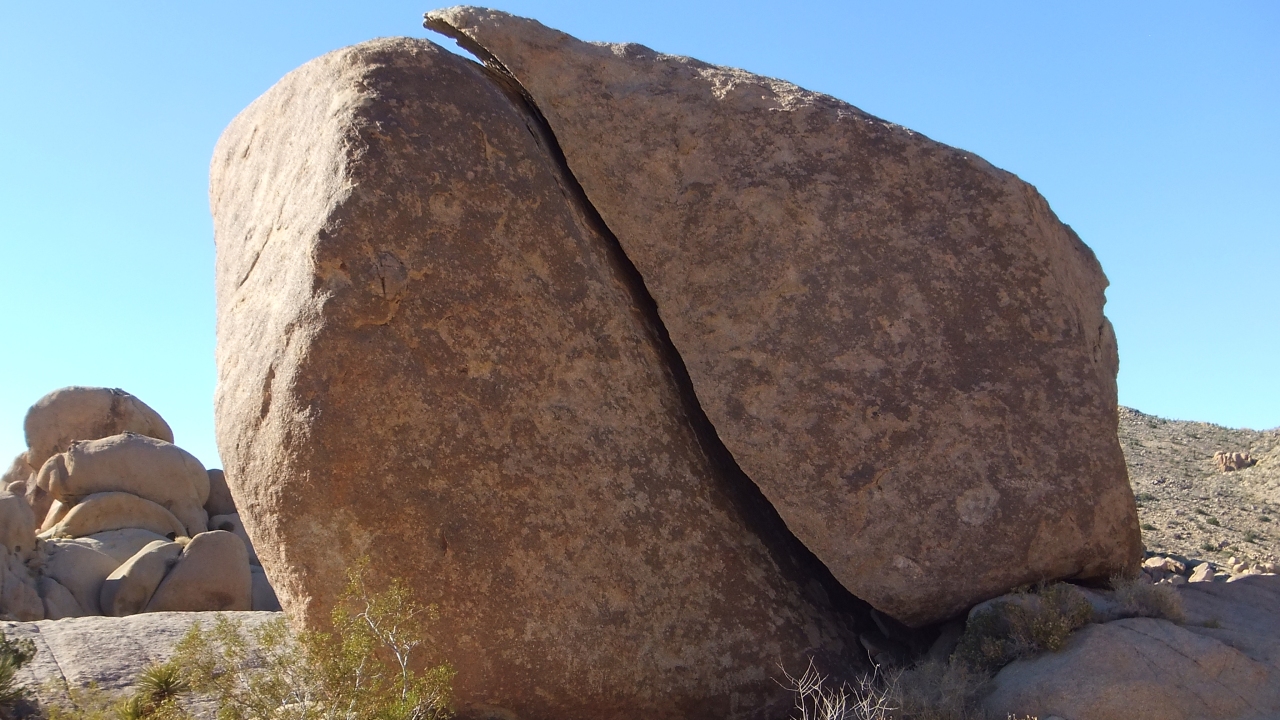 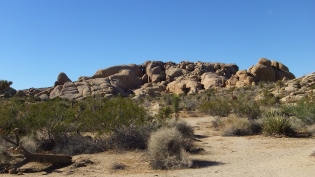 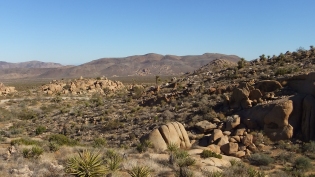 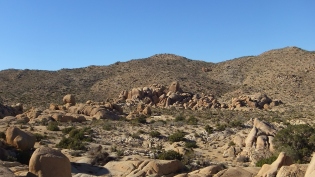 The large formation known as Split Dome lies on the east side of the parking area. It has a ‘split’ down the middle, directly east of the parking lot. Rock climbers have staked out numerous routes both left of the split and right. On the left we find “Violent Cooking,” “In and Out” (this route follows the left edge of the huge boulder at center), “Big Boy,” “Worthy of It,” and “The Environment-Oil President.”

The southern part of Split Dome (middle image below) is surrounded by many large boulders and faces. Here you will find, “Strip Search,” “Turtle Vein,” “Cleavage,” “The Nipple,” “Bike Across America,” and “Porky’s Excellent Adventure.” There are additional climbs on the east face of Split Dome (see third image in this display), with “Cleared for Takeoff,” “Flea Bite,” “The Tortoise and the Dog,” and “The Popsicle.”

The West Tiers are the rocks that form the eastern side of the small valley east of the Split Dome. They face Split Dome’s east face and the road. Several ‘tiers’ of rock characterize the northern part of this formation, with numerous crack systems. A side hike takes you to the hilltop or summit of West Tiers where some beautiful scenery provides views of 29 Palms and Belle Mountain, Belle and White Tank Campgrounds, and all the way south to The Pope’s Hat rock pile at Live Oak picnic area. 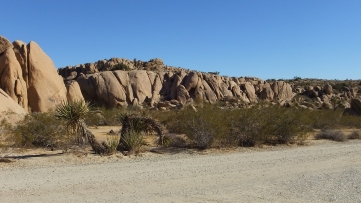 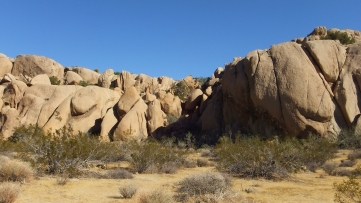 This grouping of boulders includes an abrupt cliff face; it is about 300 yards south of the parking area and west of the road. The feature is on your left as you drive toward the parking area. All climbs are on the two sections of the wall, except for one that is out of view from the road. It lies on the back side of the block which has broken free from the wall’s right end. Graceland, the home of singer Elvis Presley (1935-1977), required suitable route names and these are the ones picked: “Nothing But a Groundhog,” “Elvis Is Everywhere,” “Pelvic Thrust,” “Blue Suede Shoes,” “She’s Only 15,” and—where did he come from?—”Dick Van Dyke.”

When doing research on Mountainproject.com’s website, the following information was given: “This formation is about half a mile north of the parking area, at the south edge of a hillside. It contains the classic route “Morongo Man.” The routes get morning sun. This area is included under Split Rocks in the Vogel guide, and under Loveland in the Bartlett guide.”

Morongo Man is very near Desert Queen Dome and Fraggle Rock, explains Randy Vogel’s rock climbing book (and part of the Desert Queen Mine area—click to open a new tab for my 3D Galleries). Vogel lists three climbs, two of which rate three stars: “Morongo Man,” “Morongo Child,” and “From the Mouths of Dogs.” Mountain Project adds to these: “Bird Eating Spider,” and “Crimpergirl.”

Note, the Split Rock 2-mile loop trail traverses the small rock pile at the base of the hill at left-center. The Cliffs themselves are visible only from this angle, however, since the rising slope blocks your view when hiking the loop trail. Above the Cliffs, and beyond the peak-rock on top of Eagle Cliff, is the site of the Eagle Cliff Mine. Morongo Man Cliffs are situated beyond the brown-varnished boulder in this shot:

The northern end of West Towers (see above) contains even more interesting formations, some of which are favorites with rock climbers, others just attract photographers looking for some fascinating subjects to frame and capture in digital images. Future Games Rock is a large wall that, because it is north-facing, gets shade most of the day.

Frigid Tower is a large boulder the lies directly on the loop trail from the Split Rock parking lot to Future Games Rock. It is split along its east-west axis by a chimney. Five silly-sounding routes are staked out on Frigid Tower: “Puss Wuss,” “The Spur of the Moment,” “Prisoner of Inertia,” “Frozen at the Void,” and “Sabre.”

Beyond and to the left of Frigid Tower lies the aforementioned steep north-facing face of Future Games Rock, about one-third mile hike northeast of the parking lot. More than a dozen climbing routes are recorded.

East of the parking area (but with a strong, two-tiered west face) is West Tiers. From the parking loop facing east, head right around Split Dome formation. Climbing routes on the lower tier are “Henrietta’s Day Spa,” “Lee’s Health Studio,” “Blood and Cuts,” and “Hot Dogs on a Bun.”

Directly above is a second wall on the level above “Blood and Cuts.” Both tiers get shade in the morning but nice afternoon sun for picture-taking. Upper Tier routes are “Black Panther,” and “Predator Tigress.”

From the base of the West Tiers (el. 4,275ft) to the sloping summit area is approximate 100ft elevation gain, which provides the viewer a scenic 360-degree vista. From up top can be seen the 29 Palms desert floor to the north, Belle Mountain to the east, and Live Oak Picnic Area with its dominant Pope’s Hat rock pile plainly visible. West lies the main Split Rock complex with the 2-mile loop trail starting from the parking circle. 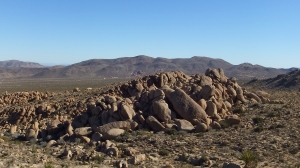 As you climb the West Tiers slope you will pass on your right a massive rock pile with one extremely large boulder stuck in it; numerous pinnacle-pointed funky-looking rocks jut up elsewhere out of the desert like they just grew there willy-nilly. Lying southeast of the parking lot, this feature has been given the rather colorless name: SE Boulders.

Neither Vogel nor Miramontes lists SE Boulders, but it is described in Mountain Project’s coverage. Ten routes are given: “Love Nugget,” “Muffin Top,” “Weapons of Mass Consumption,” “The Cracken,” “Eine Dicke Frau,” and “I Am Sparticus,” [spelled with an ‘i’]. Completing the list, we see “Invisible Baby Joan,” “Invisible Baby Jones,” “Proud New Flags,” and “Roman Baths.” → 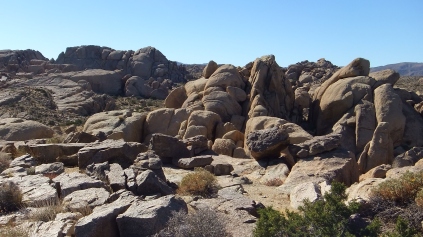 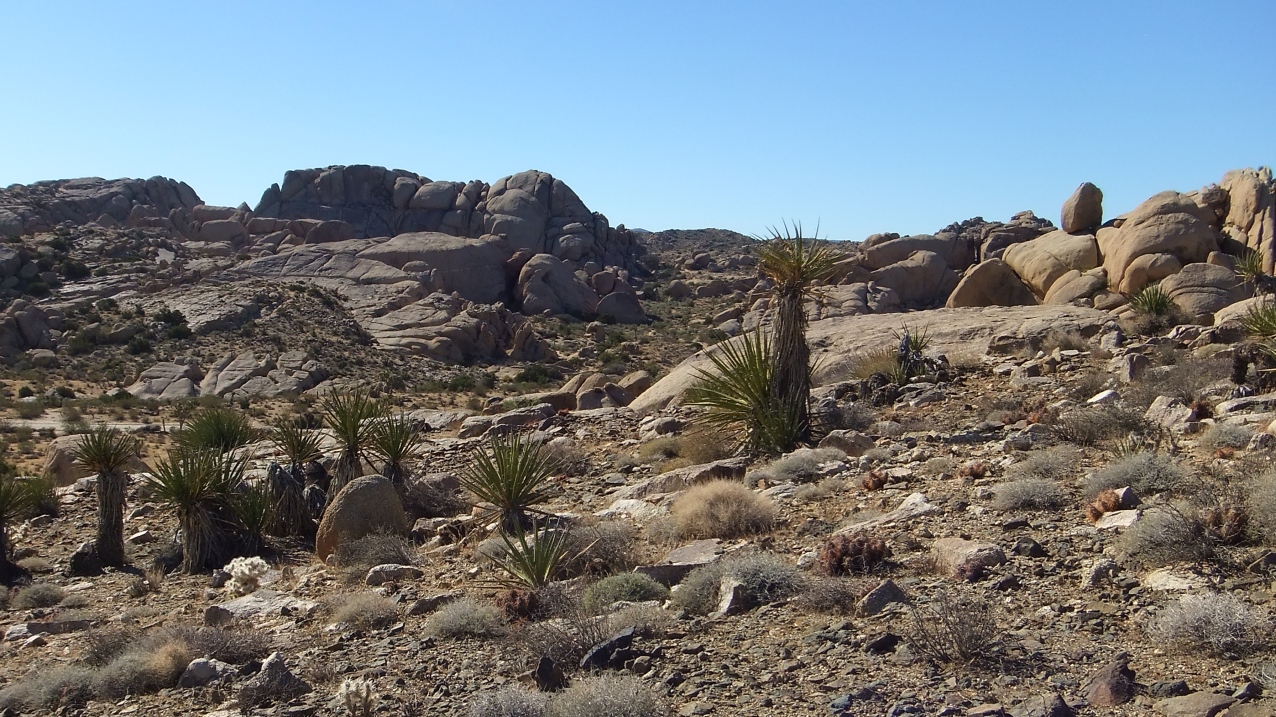 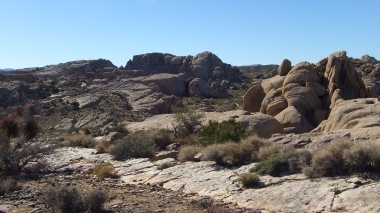 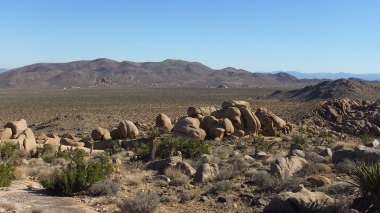 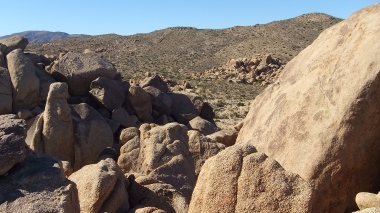 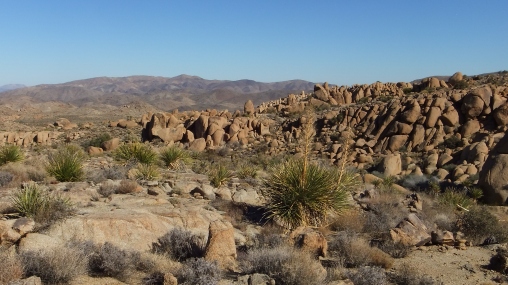 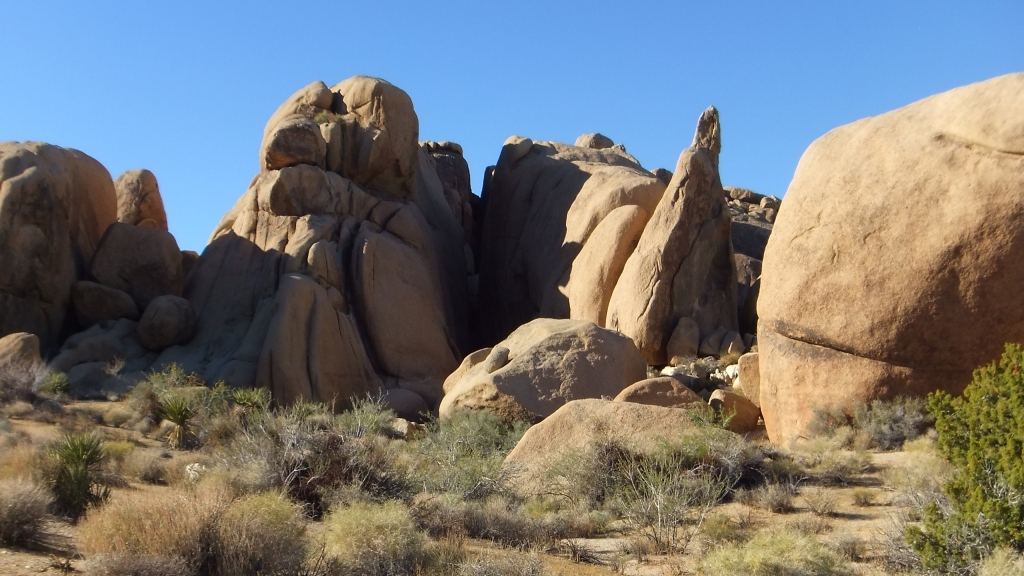 The 2-mile Split Rock Loop hike passes through a landscape of uncanny sculpted rock gardens highlighted by my favorite feature, Tulip Rock, as well as The Tooth and Face Rock—three geologic formations with likenesses to their given names.

Since it was well past the noon hour, I headed down the Loop clockwise starting about 2 P.M. on a beautiful late-November day. (Note the proximity to the picnic area. The obvious trail begins west of the parking loop.) The trail is well marked by cairns and easy to follow. I gave myself two to two-and-one-half hours since 3D picture taking is a tedious process. The trail can be done in much less time if you stroll along.

With the sun getting low in the sky, I’d have it at my back much of the time casting its welcoming golden-hour glow and late-autumn deep shadows that give Joshua Tree’s formations their spectacular appearance this time of year.

(The counter-clockwise Loop Trail, if you choose that direction, begins on the north end of the parking lot at Split Rock, a large boulder with a pronounced vertical split at its base. Pass the left side of Split Rock and look down to your left for the trail.)

Several formations named by the rock climbers were passed within minutes, the first being the Grand Canyon. West of this lies a very large boulder, Rubicon Formation. Opposite Rubicon takes you to The Snake Pit, To Cling or Fling Corridor, and Screamer Rocks with its darkly sinister Brit Corridor. (Claustrophobic types may elect to bypass Brit Corridor.) East of Rubicon, For Peter Block contains three climbs between 55ft and 90ft (large image below).

Tulip Rock, with The Tooth on its left

← Once you exit the Rubicon Formation, the clockwise route passes a few hundred yards south of monolithic Tulip Rock. Its most photogenic side faces southeast, with direct sun illuminating it and enhancing photo shoots nicely. In this gallery you will find several distant shots of Tulip Rock as well as a couple taken close up. Immediately west of Tulip Rock is ‘The Tooth’—a largish boulder that resembles a molar.

Further south and on the west side the trail passes along the base of the massive Isles in the Sky and Isles Corridor. This scenic loop trail meanders nicely in, around, and through the formations. You will enjoy doing it! 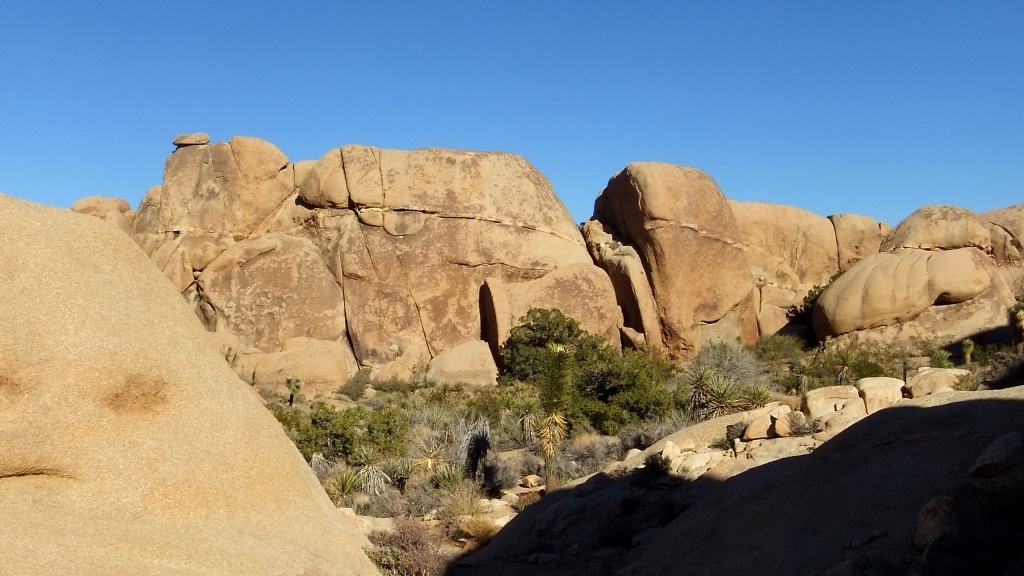 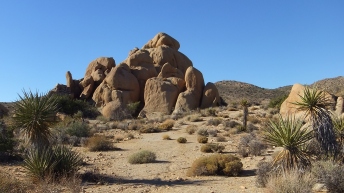 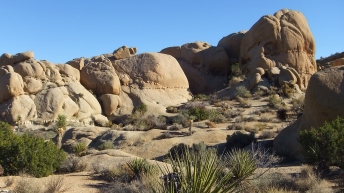 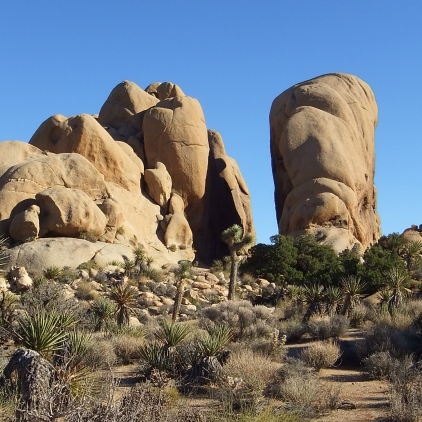 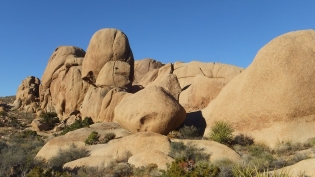 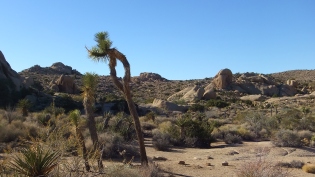 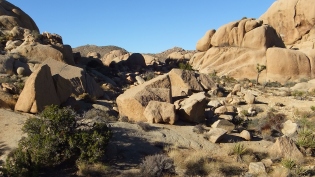 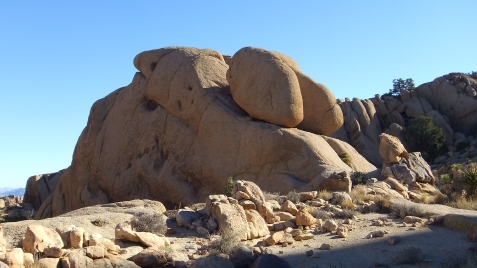 West Side ♦ Face Rock & Isles in the Sky 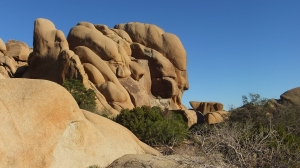 We begin the second half of our journey. Leaving the “Snake Pit” area, the Split Rock Loop Trail swings around the southern base of towering Isles in the Sky, where a signpost points the way to a side trip (further south) and Face Rock. Cattlemen used this area long ago, indicated by an old cement watering trough and some iron pipes. It is on the left side of the trail as you approach Face Rock.

The trail, once it leaves the Snake Pit area, winds through a narrow gap between Isles in the Sky and the back side of Cunning Rock (the latter being part of The Wedge at Jumbo Rocks)

Isles in the Sky, west face

North face of The Wedge at center

From Face Rock, you backtrack and the trail continues along the western side of Isles in the Sky. This is a long formation but soon returns you to the Tulip Rock corridor after passing through an opening. Before you, a huge balanced rock that has a hole at its base. Several hundred yards beyond, Rubicon Formation looks much smaller than when you stood beside it earlier. Tulip Rock and The Tooth, a small molar-shaped rock, are the most notable features.

As an aside, there are several large and inviting pine trees which offer shade here; they can be found along the northern base of Isles in the Sky. Once you leave the rocky confines of Tulip Rock corridor, the trail descends a long slope into the open desert. Visible once more, Split Rock and Split Dome’s massive formations half a mile east and the end of your hike. The Split Rock Loop Trail makes a final, leisurely swing behind a photogenic rock pile before heading across a sandy wash. You have before you Frigid Tower, its pyramid-shaped bulk protecting the surrounding granite massif like a medieval guardhouse. 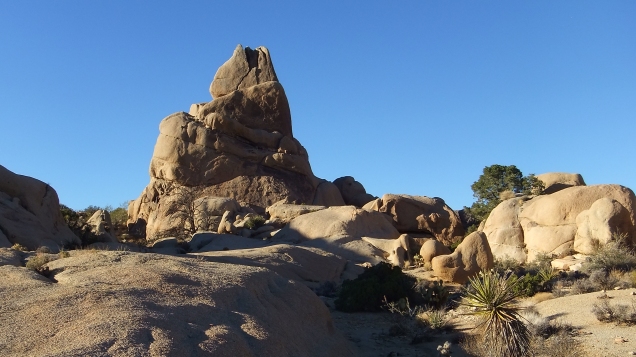 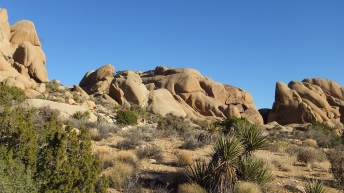 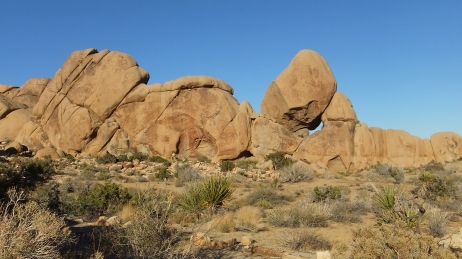 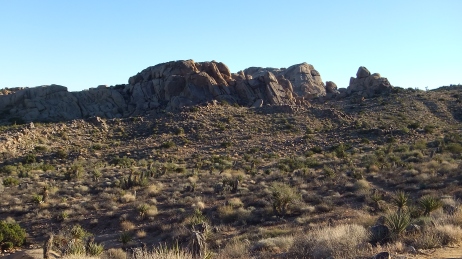